Audrey knew about his porn past when they first met but she didn’t mind.  In fact she said the idea of performing on camera intrigued her.  Otto who is a notorious perfectionist decided it would be best to put a camera in their bedroom and help her prepare for her career instead of just diving right in.  They had said they probably performed on camera 300 to 400 times before she ever filmed a real scene.  What they would do is film themselves having sex then later watch the film and analyze it to see what areas they needed to improve on. Which really helps to explain why she gets to many performer award nominations and has even been named the AVN adult performer of the year before.

Most people don’t know this but Audrey Hollander was the star of a special Eddie Van Halen video found today on YouTube.  It’s an instrumental he did for the Michael Ninn movie Catherine.  Eddie Van Halen called Audrey his muse and said her beauty helped to inspire the song. The original full version of the Audrey inpsired, Eddie Van Halen original song is over 6 minutes long but there are several cuts and versions out there on youtube now which range from 3 minutes upwards.

In early October of 2012 Audrey Hollander tweeted news that she had decided to make a return to performing and has plans on making at least 5 movies in the near future. She didn’t give any specifics as to what those movies may be but she did tweet asking fans what they would like to see her do and who.

In October of 2012, just a few days before Halloween Audrey Hollander tweeted a picture of her new tattoo. The scorpion that was on her back has been changed and it’s now a blue rose. I asked Audrey what it means and she said the blue rose means “unattainable” and then gave an adorable grin. Here is a picture I took of her new tattoo. Admittedly I’m not the best photographer but I tried. 🙂

In early 2013 Audrey Hollander decided to expand the artwork on her back and here is a picture of what her back now looks like. 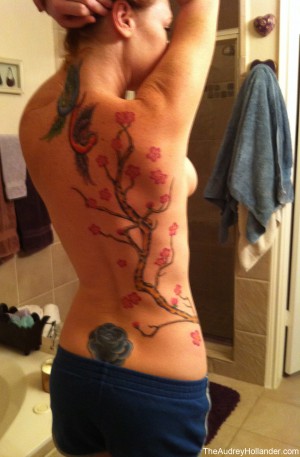